With over 50 years’ experience in the oil and gas sector, James Fisher Strainstall (JF Strainstall) was trusted by industry partners, Modec and Sofec, to design and install a custom-built bearing monitoring solution for a compromised FPSO off the Ghanaian coast. Weathervaning around a fixed turret in the Jubilee oil field – which produces 150,000 barrels per day – the FPSO’s bearing encountered wear issues that immobilised the vessel, risking production targets.

Modec approached its long-standing industry partner, JF Strainstall, following the success of previous projects in which the team collaborated with Modec to deliver tendon tension monitoring systems on time and to budget. 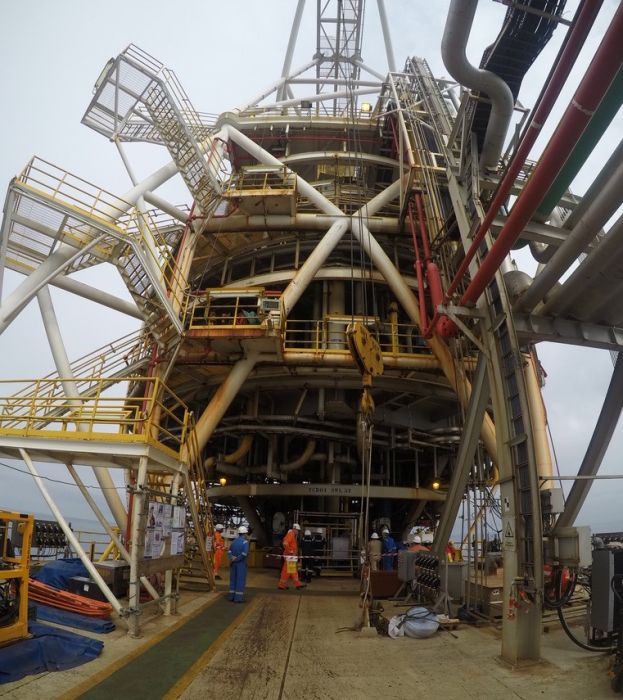 Working against a demanding lead time, the team developed a hydraulic jacking control system and implementation plan that mitigated downtime. The solution was engineered with two key aims in mind; to separate the FPSO’s 4,000-tonne turret from the vessel to enable the bearing’s replacement and to measure its displacement and movement in real time.

Working closely with Modec and Sofec – who arranged the turret’s repair – JF Strainstall met the challenging timeframe by deploying a compact, modular design for accelerated delivery and ease of integration. To ensure accurate monitoring, this hazardous area certified system was specially engineered for operation while the vessel was still under production. Throughout the project, JF Strainstall also collaborated with James Fisher Group sister company, Fendercare, which designed a bespoke floating hose to enable the ship-to-ship transfer of crude oil.

“JF Strainstall, Modec and Sofec have built a strong relationship over a period of almost 20 years working on 14 projects together. This proved invaluable as JF Strainstall was able to deliver an established solution tailored to the needs of the turret repair team. Our field service and project management team worked closely with the operations team in Ghana to train personnel and install the system. Ultimately, the jacking operation was completed in advance of the original deadline."

From outset to delivery, JF Strainstall worked alongside its industry partner to support the project at every stage of its development. With the FPSO now moored on its new heading, Modec has expressed positive feedback on the quality and performance of JF Strainstall’s solution, particularly commending its delivery ahead of schedule.